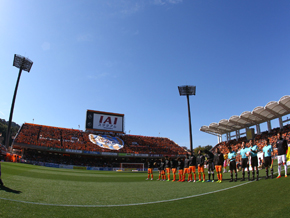 S-Pulse made their return to J1 under clear blue skies and in front of packed stands, but the visitors from Kansai ensured it was a frustrating afternoon for the soccer crazy Shizuoka locals.

The majority of the stadium was sold out long before the gates had opened, with Shimizu fans clearly impatient to see their team back in the top flight. The euphoric nine game winning streak which swept the club to promotion was still fresh in the mind, and it was with that momentum that a slightly remodeled starting eleven took the game to Kobe. New faces included Rokutan in goal and Freire in midfield, with both producing solid performances, boding well for the season ahead.

With defences relying more on methodical execution of roles than the moments of inspiration more associated with attackers, both sides worked to shake off the closed season cobwebs which produced a game that, while not spectacular, maintained a level of intrigue throughout. Perhaps inevitably, scoring chances were generally limited to longer range efforts, with few troubling the goalkeepers. That the lone goal of the afternoon came via a corner was in keeping with the game’s mood. To the chagrin of the massed home ranks the breakthrough came for the guests, with Hashimoto pouncing to poke home a loose ball after Rokutan’s fantastic save denied Watanabe’s header.

Following an encouraging performance, few will be dwelling on defeat, especially with match day 2 just around the corner. On Saturday S-Pulse take to the road, heading out west to face 2015’s J. League champions Hiroshima. Though a staunch test for your heroes, Kobayashi’s side will be motivated and ready as they look for their first three points of the season. If you’re unable to make the trip, be sure to stay in touch with all the action the moment it happens via our English language Twitter service: @spulse_eng